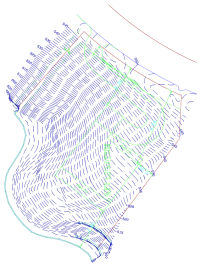 A Topographic Surveyor performs a Topographic Survey and collects survey data to locate man-made and natural marks and its elevations on a particular portion of land. It normally comprises any man-made underground marks such as utility lines. It will also illustrate ground level installations such as utility poles, buildings, walls, and many other significant installations.

The utilization of standard topographic surveying procedures are commonly employed to provide accurate measured plan of terrain. It is also used during the mapping and graphing phases of projects to blueprint the locations and layout of the installations, road, buildings, and many other engineering and architectural projects in the construction industry.

Why Hire a Topo Surveyor?

The purpose of getting a Land Surveyor to do topographic survey is to obtain an accurate documentation of the present state of a parcel of land that will be constructed on; either a building, a wall, or any other construction activity. The design engineers make use of the topo survey as they plan the design and then the proposal of the final surface.

Additionally, the architect may plot the surface in 3D to picture out the finished look with the improvements he might add. This plot may be presented to the construction owner, building owner, or the land owner before the actual construction takes place. An accurate topo survey is of big help to ensure the installations and improvements fits in on the site within its boundaries.

Common Methods that a Topo Surveyor use

An Aerial Topographic Survey is done on the airspace. It is taken either in a helicopter or in an airplane at a defined distance above the ground level. Aerial photos of the ground surface are then taken and examined by the topo surveyor. This will allow him to envisage the ground surface through the structure of a stereo pair. By looking at the two overlapping aerial photos, the vantage points are determined.

A Conventional Topographic Survey is done when there is a need to get the accurate contour interval and spot elevations. The Aerial Topographic Survey is limited in the precise vertical and horizontal point location of the ground surface. These are just simplified elaboration of the two methods of topographic survey to provide you an overview. Read and research to learn in depth about them or ask a topo surveyor.

If you need a Topographic Survey, Please call Ringgold Land Surveying today at (706) 222-3522  or fill out a contact form request for more information concerning your land surveying needs.

What is Land Surveying? 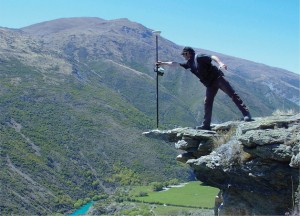 Land Surveying dates back to ancient history. Surveying is used for multiple projects.  A survey is done to establish a specific location of a parcel of land along with its exact acreage.  It is used to ascertain boundaries for defining an area of ownership and tax liability.  It is also used to identify a piece of property by a written legal description or to provide a review of the accuracy of an existing description. Data from land surveying is of the utmost importance with regard to buying and selling land, and is also used to insure a clean and marketable title.

Other types of Land Surveying

There are many different kinds of surveys that can be performed. Boundary surveys are typically done for undeveloped land. This type of land surveying measures the actual physical extent of the property in question. Most surveys progress through the basic procedures regardless of the type being done. Any pertinent deeds, contracts, maps or other documents that contain a description of the property’s boundaries are located, studied and interpreted. A determination is made of what the actual property description is deemed to be, along with the locations of any physical evidence of the boundaries. This can be in the form of both natural and man-made monuments or markers that exist in the field. The property is then measured to establish the boundaries, not only using the appropriate existing monuments but with the creation and referencing of new markers where necessary. Measurements are accomplished using a total station and other land surveying tools. A total station measures both vertical and horizontal angles, as used in triangulation networks. After these steps are accomplished, the property description and plat are prepared.

Interpreting the results of a land survey is not as difficult as it may first seem. For instance, a property plat will usually contain a directional orientation which is typically indicated with an arrow pointing north. It will contain the bearing and distance of each boundary line, the property lines of other properties shown on the plat, and the names of adjacent property owners listed in the areas of their property. Corner monuments, along with the names of any natural monuments (such as “Smith’s Creek”, for example) or a brief description of any unnamed natural monuments (such as the “30-inch pine tree”) are on the plat. There is also a title block containing the property’s location and name of owner, the surveyor’s name, the date the survey was performed, the scale of the plat and any other relevant data.

If you need the services of a surveyor for your land surveying needs, ALWAYS be sure that you’re hiring an experienced, certified, and highly competent professional surveyor. You can find out if the surveyor is licensed by visiting the Georgia Secretary of State’s Professional Licensing website.

ALTA stands for American Land Title Association. ALTA Title Survey is actually similar to boundary or lot survey of a certain piece of land. However, an ALTA Title Survey has further requirements for the land surveyor as he executes the survey.
Most states have widely varying standards for surveying. Thus, ALTA Title Survey follows a national standard for lot surveying aimed to generate consistency regardless of the location of the survey. It is usually done on multi-family residential or commercial sites and when the owner and lender are from different state jurisdiction. But more often than not, it is prepared for commercial properties because it provides the information needed in order to insure the title to the land. Commercial developments may also require improvements to a high level that is also obtained through this survey.

Costs for such surveys could go up to 50% – 200% more than a similar boundary survey. It is also important to note that the more restrictive standard is followed in the survey if and when the state standard is more restrictive on a certain aspect than the ALTA standard. An ALTA Title Survey must show all data including boundary lines, main building location and all its improvements, location of ancillary buildings, rights-of-way, and easements or access rights by services such as water, telephone, gas lines, railway and other utilities. A helpful tip in outlining the scope of services of the land surveyor is to thoroughly go over the elements of “Table A – Optional Survey Responsibilities and Specifications”.
Before an ALTA Title Survey can be completed, there must be a current title commitment. This is where the land surveyor will refer for the legal description of the property and all legal encumbrances or exceptions. The areas of ownership, encumbrances, and improvements will be presented graphically including encroachments, if there is any.

If we can help you with an ALTA Title Survey in the future, please don’t hesitate to contact us at Ringgold Land Surveying Land Surveying at (706) 222-3522 or fill out our contact form by clicking the link.